The Royal Bed, by Siôn Eirian, an English language adaptation of Siwan by Saunders Lewis 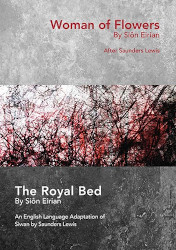 The Royal Bed is a short but epic drama by Siôn Eirian based on his 1993 English language adaptation of Siwan, by the renowned Welsh playwright Saunders Lewis, for BBC Radio 4.

All rights are strictly reserved.

With the support of the Welsh Government, the Arts Council of Wales and Curo Advisers Limited, The Royal Bed was commissioned by Theatr Pena and was a co-production with The Riverfront, Newport.

It was first performed at The Riverfront, Newport on 11th February 2015 with the following cast: